MONSTER was one of 10 European projects selected to pitch at the Frontières International Financing and Co-Production Market in Montreal, alongside 9 projects from North America.

Frontières is hosted by the Fantasia International Film Festival and supported by the Cannes Film Festival’s Marche du Film.  It was created as a financing and co-production platform for genre filmmakers to showcase their projects to international industry players and has a host of success stories including: Julia Ducournau’s multi-award winning feature debut RAW; Jenn Wexler’s THE RANGER, screening at London’s Frightfest 2018. 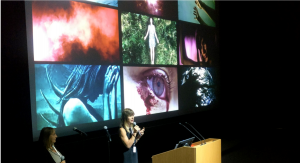 Laura and Jenny presenting MONSTER at the Frontières Market

Laura said “Frontières connected us to major international players in the genre film scene which we’d be unlikely to meet in the UK and introduced us to fellow genre filmmakers whose work I continue to be inspired by.  It was great to see that almost half the projects were female-helmed and aimed at both female and male audiences, breaking the stereotype that genre is only of interest to men”

Read more about why Frontières is such an important market for genre filmmakers in Dread Central’s article:

Posted on August 9, 2018 by Jasmin Greenland