IndieWire selects Monster as a highlight of the Frontières Market

Horror legend Michael Gingold at IndieWire described Monster as “an intriguing marriage of the psychological and the visceral” and a highlight of the “fascinating range of projects unveiled during Frontières’ seventh edition”. 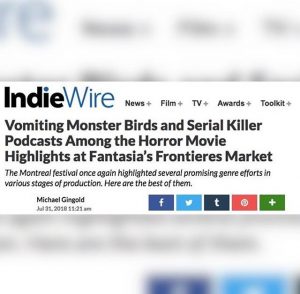 Here’s what else Gingold had to say about Monster:

“Gruesome poetry” was how writer-director Laura Smith, accompanied by producer Jenny Walker, explained the goal of her film, whose teaser portends an intriguing marriage of the psychological and the visceral. Smith’s story concerns a photographer whose trip to the Celtic coast instigates her transformation into a mythical sea creature, and is rife with subtext about the female condition and the way society acts upon it. The duo’s pitch made it clear that they’re aiming to play on numerous emotions with “Monster,” and on the physical-horror side, they’ve got a strong prosthetics player on their team: Kristyan Mallett, who was responsible for the remarkably realistic cadaver effects for “The Autopsy of Jane Doe.”

Other projects featured in the article include Finnish director Hanna Bergholm’s gruesome horror, Birds of a Feather, which tells a horrific coming of age story, and Writer/Director Nyla Innuksuk’s science fiction Slash/Back about a group of young Inuit girls trying to rid their Nunavut community of aliens.

You can find out about all the selected projects by reading the full article here: https://www.indiewire.com/2018/07/best-horror-movies-fantasia-frontieres-market-2018-1201989611/